Supported versions of After Effects

DuSan is developed and tested using the latest released version of After Effects and the current Beta to make sure it is future-proof.

It may work with older versions too (although it is advised to keep After Effects up-to-date).

It will not work with After Effects CS6 and older versions. Sorry, it’s time to update!

2 - Unzip the files you have downloaded

3 - There are several ways to install DuSan very easily

a. Copy the files

Copy all the files from the ScriptUI Panels folder to:

You may need administrator privileges to install DuSan this way. If you don’t have them, see the other ways below.

With the other installation methods, some features using third party tools, like transcoding sound when exporting to Adobe Audition, may not work correctly.

b. Shortcut for After Effects CC2018 and more recent

c. Using the menu for After Effects CC2019 and more recent

4 - Restart After Effects and DuSan will be available in the “Window” menu.

You’ll always be able to run DuSan without even installing it. This is a good way to use it if you do not have administrator privileges on an older version of After Effects.

On first run, DuSan may first ask for file and network access, this is mandatory to make it work (DuSan needs to write its icon files, effects, etc.).

Then, you will have to choose the language you want to use. Default is Esperanto. It can be changed later in the settings panel.

If for any reason DuSan won’t start anymore (this happens sometimes when the settings file gets corrupted for example, especially on Mac OS…), you can try to fix it with this simple procedure:

This script is available in the tools subfolder of the DuSan zip archive you’ve downloaded to install DuSan. If you need to re-download it, you can get it here.

To run it, just go to After Effects, File/Scripts/Run script file.... 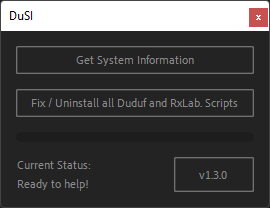 Just click on the “Fix / Uninstall…” button to fix DuSan (and other scripts). Then you should be able to restart DuSan.

If you want to remove DuSan, and be sure to remove all the files it left behind, you’ll have to remove its panels by yourself from the ScriptUI Panels.

From here you can search these documents. Enter your search terms below.